Pride and Prejudice and Zombies

The story follows the plot of Pride and Prejudice, but places the novel in an alternative universe version of Regency-era England where zombies roam the English countryside. Described as the "stricken", "sorry stricken", "undead", "unmentionables", or just "zombies", the deceased ancestors of England are generally viewed by the characters as a troublesome, although deadly, annoyance. Their presence modifies the original plot of the story in both indirect and noteworthy ways: Messages between houses are sometimes lost when the couriers are captured and eaten; characters openly discuss and judge the zombie-fighting abilities of others; women weigh the pros and cons of carrying a musket; it provides safety but is considered "unladylike".

Unladylike!? I think walking around being one of the undead is more unladylike. Women, ugh! There is a time to be proper and time to ... well ... not. This book started out rough for me cause it took me a bit to remove myself from the original. Once I started to let my freak-flag fly, the story turned out to be quite good and kept me interested.

2000 American historical war film starring Mel Gibson, Chris Cooper, and Heath Ledger *sigh*. The American Revolution occurs in 1776. Widower Benjamin Martin a veteran of the French and Indian War, is called to Charleston to vote in the South Carolina General Assembly on a levy supporting the Continental Army. Fearing war against Great Britain, Martin abstains while Captain James Wilkins votes against and joins the Loyalists. A supporting vote is nonetheless passed and against his father's wishes, Martin's eldest son Gabriel joins the Continentals. Years later Charleston falls to the British and Gabriel returns home injured, carrying dispatches. The Martins care for both British and American wounded after a nearby battle, before British Dragoons led by ruthless Colonel William Tavington arrive and arrest Gabriel. When Martin's son Thomas interferes, he is killed by Tavington, who then orders the Martin's house burned and American wounded killed. Martin and his young sons retaliate by ambushing the British convoy, freeing Gabriel. A British survivor tells Tavington of a single man killing all, earning Martin the moniker of "The Ghost". Gabriel and Martin resolve to fight the British, leaving the children in the care of Martin's sister-in-law, Charlotte.

And so the story continues. Oddly my oldest son, born in 1998 (two yrs before the movie), was not named after Heath Ledger’s character but they share the same name, however Martin is my son’s middle name and not last. Cool little tidbit.

*drooling and a heavy sigh* 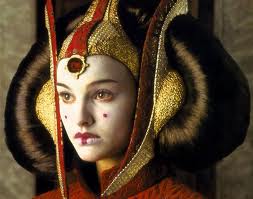 Born Padmé Naberrie, in a mountain village on Naboo. Padmé Naberrie became known successively by her Name of State as Princess Amidala of Theed, later becoming Queen Amidala of Naboo and Senator Amidala of the Galactic Republic, who adheres to the principles of democracy and rule of law. The mother of Luke Skywalker and Princess Leia Organa is first mentioned in the 1983 film Return of the Jedi, though she is not named. While in the Ewok village on the forest moon of Endor, Luke informs Leia that she is his sister and that the Sith Lord Darth Vader is their father. When asked if she remembers her "real mother," Leia answers, "She died when I was very young" then later when Luke asks more of her memories, she says, "She was very beautiful... Kind ... but sad". Luke confesses he has no memories of their mother, and the discussion ends as he leaves the village to confront Vader on the second Death Star.

She is one of my most favorite female characters of all time. Of course Ass-kicking Leia is a tied second to Terminator’s Sarah Connor. But Padmé was strong willed, steadfast, and knew what she wanted. A perfect role model for all girls. Feminine yet powerful. 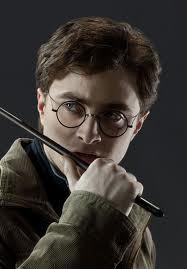 The title character and the main protagonist of J. K. Rowling's Harry Potter series. The majority of the books' plot covers seven years in the life of the orphan Potter who, on his eleventh birthday, learns he is a wizard. Thus, he attends Hogwarts School of Witchcraft and Wizardry to practice magic under the guidance of the kindly headmaster Albus Dumbledore and other school professors. Harry also discovers that he is already famous throughout the novel's magical community, and that his fate is tied with that of Lord Voldemort, the nationally feared Dark Wizard and murderer of his mother and father. Harry is categorised as a "half-blood" wizard in the series, because although both his parents were magical, his mother, Lily Evans, was "Muggle-born". Meanwhile his father, James Potter, was a pure-blood descended from one of the most ancient pure-blood families, the Peverells, who lived before the founding of Hogwarts. Harry is described as having his father's perpetually untidy black hair, his mother's bright green eyes, and a lightning bolt-shaped scar on his forehead. He is further described as "small and skinny for his age" with "a thin face" and "knobbly knees", and he wears round eyeglasses. Harry is particularly talented in Defence Against the Dark Arts, and also good at Quidditch.

Gosh I am drooling again! WHAT! I find Harry ...er, huh ... Daniel attractive in a weird sorta way. *wipping mouth on sleeve* 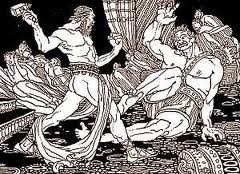 One of the best known poems from the Poetic Edda. The giant Þrymr steals Thor's hammer Mjölnir and demands Freyja as payment for it, desiring the goddess as his own wife. Instead of Freyja, the Æsir dress Thor as the bride and Loki as the bridesmaid, and the two travel to Jötunheimr for the "wedding." Thor's identity is comically hinted at throughout the reception (the god eats an entire ox on his own), with Loki providing weak explanations that the giants somehow accept for the odd behavior (he claims that the bride's immense hunger stems from her not having eaten for the last seven days for her excitement). Mjölnir is eventually placed into Thor's hands as part of the wedding ceremony, allowing the god to strike down the giants and return home.

Email ThisBlogThis!Share to TwitterShare to FacebookShare to Pinterest
Labels: A to Z Challenge, Harry James Potter, Padmé Amidala, Pride and Prejudice and Zombies, The Patriot, Þrymskviða