Express Yourself - May - Catching Up

Busy, busy, busy! The end of the school year and beginning of summer has consumed my life lately. But I finally have some time to catch up on my EYM posts!

May 5-9: Choose one of your fave books. Turn to page 89. What are the eigth & ninth sentences?

I’ve either been listening to Audiobooks or catching up on my e-reads which means my page count will be off. So I have opted to pick two lines from Grace Lost by Lauryl M. Lewis…

Gus broke our reunion. “I think we should get out of this place. They’ve been dead awhile. Nothing in here is going to be salvageable.”

May 12-16: Pick one fictional character who you think reflects your personality.

This is hard because I connect with a lot of characters but the one I love the most because she reminds me so much of myself is Aphrodite from the House of Night series by P.C. and Kristen Cast.

And to be caught up all the way, this week’s questions is (drum roll please)…

May 19-23: Have you ever known someone or dated someone who could be a celebrity twin?

Yes. My first husband looks exactly like Billy Corgan when he shaved his head and he was even a singer in a band who was signed by Universal Records and even has a song on American Pie 2.

AND… If Nascar stud, Dale Jr and singer, Justin Timberlake were to have a baby together… my husband would be the result. Hubba hubba! 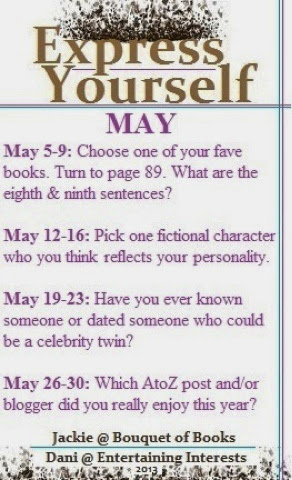