A to Z - Junk vs Jobberknolls

A modernized look at the zombie genre. Coming from an illustrious background of horror movies and Asian genre, this film directly represents its own style and movement. Sometimes it is described as having “Retro zombies” but they are still your average zombies except for one stand-out dead thing that steals a main part of the show. 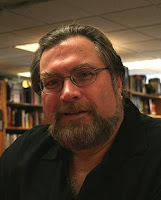 The multiple Bram Stoker Award-winning author of Ghost Road Blues, the first of the Pine Deep Trilogy, a series of supernatural horror novels. Maberry has been active as a professional writer and writing teacher since 1978. Along with comics here a list of his books. Ghost Road Blues, Dead Man's Song, Bad Moon Rising, Patient Zero, The Dragon Factory, The Wolfman, Rot & Ruin, The King of Plagues, Dust & Decay, Dead of Night, Assassin's Code, The Others, Visitors, Vampire Universe: The Dark World of Supernatural Beings That Haunt Us, Hunt Us and Hunger for Us The Cryptopedia: A Dictionary of the Weird, Strange, and Downright Bizarre Zombie CSU: The Forensics of the Living Dead THEY BITE!: Endless Cravings of Supernatural Predators,Ultimate Jujutsu: Principles and Practices, Ultimate Sparring: Principles & Practices, The Martial Arts Student Log Book, Judo and You: A Handbook for the Serious Student, MacDougall, Shane (pseudonym) The Vampire Slayers' Field Guide to the Undead.
Have you read any of his books?
Which ones have I read? Rot & Ruin, Dust & Decay, and Patient Zero

2001 American horror film. The film chronicles a day in the life of siblings, Trish and her brother Darry Jenner  coming home from college for spring break. As they drive through the Florida countryside in their 1960 Chevrolet Impala, a mysterious driver in a rusty old delivery truck tries to run them off the road. After letting the vehicle pass them, they later see the same truck, in the distance off the side of the road, with a hulking man sliding what looks to be bodies covered with blood stained sheets, into a large pipe sticking out of the ground next to an old, abandoned church.
Did I peak your interest? Well, you’ll have to watch the movie to see how The Creeper hunts down the “things” he wants most and what comes of Trish and Darry.
It’s one of my fav scary movies but I like Jeepers Creepers 2 the most. But please… stay tuned for JC3 and JC4. 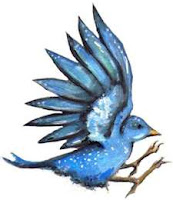 A small, blue speckled bird that never makes any noise until the moment before it dies. It then lets out a long scream, which consists of every sound it ever heard backwards. Jobberknoll feathers are used in Truth Serums and Memory Potions. Its main food supply is small insects. 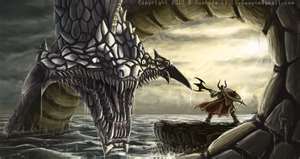 Or Jormungand, or Jörmungand and also known as the Midgard Serpent or World Serpent, is a sea serpent, the middle child of the giantess Angrboða and the god Loki. According to the Prose Edda, Odin took Loki's three children by Angrboða, the wolf Fenrir, Hel and Jörmungandr, and tossed Jörmungandr into the great ocean that encircles Midgard. The serpent grew so large that he was able to surround the earth and grasp his own tail. As a result, he received the name of the Midgard Serpent or World Serpent. When he lets go, the world will end. Jörmungandr's arch-enemy is the god Thor.
Posted by Dani at Wednesday, April 11, 2012