A to Z - The Hollows to Horcruxes

The Hollows Series
By Amanda Hocking
amandahocking.blogspot.com
Not the best zombie series I’ve read by still a good one. Her writing style is very “breakneck” speed.

Hollowland
"This is the way the world ends; not with a bang or a whimper, but with zombies breaking down the back door."

Nineteen-year-old Remy King is on a mission to get across the wasteland left of America, and nothing will stand in her way - not violent marauders, a spoiled rock star, or an army of flesh-eating zombies.

Hollowmen
After six months in the quarantine, Remy finds out things are much worse than she feared. Her plans to escape come with a heavy cost, and she realizes that zombies aren't the worst of her problems.

by Stephanie Meyer
Melanie 'Mel' Stryder is one of the only rebel humans left after the invasion of the 'souls', parasitic aliens which take over human bodies, erasing the original occupants. Wanderer is a soul who has lived on eight other planets previously, Mel being her ninth body host. Melanie remains partially conscious despite her infestation, an aberration for which wanderer feels some shame and no small amount of concern. She bombards Wanderer with her memories and emotions, and Wanderer develops an emotional connection of her own to Melanie's former lover and brother and the search is on to find them and for Wanderer to find herself and maybe her one true love.

Horcruxes
An object used to store part of a person's soul, protecting them from death. If the body of the Horcrux's creator is destroyed, the person is still able to survive. A Horcrux requires one to commit a murder, which, as the supreme act of evil, rips the soul apart. After the murder, a spell is cast to infuse part of the ripped soul into an object, which then becomes a Horcrux. 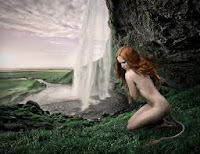 Or the skogsrå or skogsfru/skovfrue or tallemaja is a Swedish seductive forest creature. In Norway, the huldra has often been described as a typical dairymaid, wearing the clothes of a regular farm girl, although somewhat more dazzling or prettier than most girls. The huldra is one of several keepers or wardens, including the aquatic Sjörå later identified with a mermaid, and the bergsrå in caves and mines who made life tough for the poor miners. Male hulders do appear, called Huldrekall. This being is closely related to other subterrestrials, usually called tusser. Like the female counterpart, the huldrkall is a shapeshifter who often lures girls under a fair countenance or glamour.
Posted by Dani at Monday, April 09, 2012