A to Z - Ωmega vs Ophelia

The film is an unofficial adaptation of the novel I Am Legend by Richard Matheson, the title being a hybrid of The Omega Man and 2007's I Am Legend with Will Smith, two other film adaptations of the same novel. The movie was intentionally released as a "Mockbuster" to capitalize on Smith's big-budget film. The film takes place in a post-apocalyptic Los Angeles, which is overrun by savage, zombie-like, cannibalistic humans who have degenerated into a feral subspecies as the result of a genetic infection. Starring Mark Dacascos…
umm… maybe Mark can dance his way into the kitchen and Iron Chef those zombies some dinner. It would have made for a better use of my time.

O Brother, Where Art Thou?

A 2000 comedy film starring George Clooney, John Turturro, Tim Blake Nelson, John Goodman, Holly Hunter, and Charles Durning. Set in 1937 rural Mississippi during the Great Depression.
In 1937, Ulysses Everett McGill,  Pete Hogwallop, and Delmar O'Donnell escape from a chain gang at Parchman Farm and set out to retrieve the $1.2 million in treasure that Everett claims to have stolen from an armored car and buried before his incarceration. They have only four days to find it before the valley in which it is hidden will be flooded to create Arkabutla Lake as part of a new hydroelectric project. Along the way, Pete’s cousin tries to turn them in, a bank robbery with the famous bank robber George Nelson (who loves to kill cows), a run-in with three sirens who seduce the group and drug them with alcohol before seemingly turning Pete into a toad, and a mugging by a one-eyed Bible salesman named Big Dan Teague. 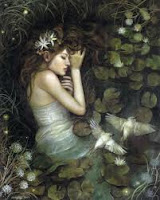 A character in the play Hamlet by William Shakespeare. She is a young noblewoman of Denmark, the daughter of Polonius, sister of Laertes, and potential wife of Prince Hamlet. As one of the few female characters in the play, she is used as a contrasting plot device to Hamlet's mother, Gertrude. The final time Ophelia appears in the play is after Laertes comes to the castle to challenge Claudius over the death of his father, Polonius. Ophelia sings more songs and hands out flowers, citing their symbolic meanings although interpretations of the meanings differ. The only herb that Shakespeare gives Ophelia herself is rue; "... there's rue for you, and here's some for me; we may call it herb of grace o'Sundays; O, you must wear your rue with a difference". Rue is well known for its symbolic meaning of regret, but the herb is also highly poisonous and has powerful abortive properties. Queen Gertrude reports that Ophelia had climbed into a willow tree, and then a branch broke and dropped Ophelia into the brook, where she drowned. At Ophelia's funeral Laertes then jumps into Ophelia's grave excavation, asking for the burial to wait until he has held her in his arms one last time and proclaims how much he loved her. Hamlet, nearby, then challenges Laertes and claims that he loved Ophelia more than "forty thousand" brothers could 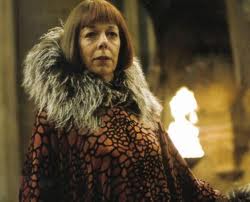 Headmistress of Beauxbatons. When Harry is chosen as the fourth champion and second Hogwarts champion, she is angered and is about to leave the tournament, but she eventually agrees to stay. It is revealed that Madame Maxime's huge size is due to her half-giant background. She fiercely denies this, although she is around the same height as fellow half-giant Rubeus Hagrid. Upon first sight, Hagrid immediately takes a crush on Madame Maxime, which he shows by attempting to groom himself properly and wearing his hairy brown suit when she is around. In OFTP, Hagrid tells Harry, Ron, and Hermione that he and Madame Maxime visited the giants during that summer in order to get them into the Order of the Phoenix's side. Unfortunately, they failed in their mission, because Voldemort also sent a group of Death Eaters to address the giants. When giants attack Hagrid, Madame Maxime defended him by using a conjunctivitis curse. She returns to Beauxbatons alone. In Half-Blood Prince, Madame Maxime is among those paying respects at Dumbledore's funeral. Her last appearance is in Deathly Hallows, where she attends the wedding of Bill Weasley and Fleur Delacour. 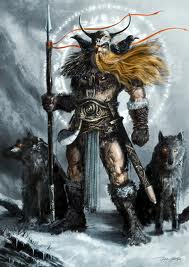 A major God in Norse mythology and the ruler of Asgard. His name is related to ōðr, meaning "fury, excitation," besides "mind," or "poetry." His role, like that of many of the Norse gods, is complex. Odin is a principal member of the Æsir and is associated with war, battle, victory and death, but also wisdom, magic, poetry, prophecy, and the hunt. Odin has many sons, the most famous of whom is Thor. The Roman historian Tacitus may refer to Odin when he talks of Mercury. The reason is that, like Mercury, Odin was regarded as Psychopompos, "guide of souls." As Odin is closely connected with a horse called Sleipnir, a spear called Gungnir, and transformation/shape shifting into animal shapes, an alternative theory of origin contends that Odin, or at least some of his key characteristics, may have arisen just prior to the sixth century as a nightmarish horse god (Echwaz), later signified by the eight-legged Sleipnir. Some support for Odin as a latecomer to the Scandinavian Norse pantheon can be found in the Sagas where, for example, at one time he is thrown out of Asgard by the other gods — a seemingly unlikely tale for a well-established "all father". However, it could also mean Odin represented an older cult of proto-germanic hunter-gatherers, his association with being a wanderer and having shamanic qualities, and this story might on the contrary mean the Odin-cult was taken over by newer sedentary cults. Scholars who have linked Odin with the "Death God".
Posted by Dani at Tuesday, April 17, 2012

Email ThisBlogThis!Share to TwitterShare to FacebookShare to Pinterest
Labels: A to Z Challenge, I Am Ωmega, O Brother, Odin, Olympe Maxime, Ophelia, Where Art Thou