A to Z - Ultimate Marvel Zombies and U-No-Poo

Later on today I will be Unveiling an Upcoming Blogfest a friend and I are doing this summer. If you have been here and won't be back until tomorrow... don't fret... I will repost about it everyday during the A to Z Challenge! Happy U day!

The Frightful Four are Zombie counterparts of the Fantastic Four.
Marvel Zombies is a five-issue limited series published from December 2005 to April 2006 by Marvel Comics. The series was written by Robert Kirkman with art by Sean Phillips and covers by Arthur Suydam. It was the first series in the Marvel Zombies series of related stories. The story begins with a virus reaching Earth, turning most of Earth's superheroes (and some civilians) into zombies. In the Marvel Multiverse is an alternate Earth designated Earth 2149, which contains alternate versions of Marvel superheroes. The story begins as a zombified Sentry infects the Avengers, after he crashlands in New York. The infection spreads via contact with the blood of the victim, usually through a bite by an infected individual. The zombified superbeings largely retain their intellect and personality, although they are constantly driven by the hunger for fresh meat.
I have never read any of these but if Robert Kirkman has his hands in it, then I’m dying to read them! Has anyone read these?

Underworld tells the story of Selene, a Death Dealer, bent on destroying the Lycans who allegedly killed her family. She discovers that the Lycans are pursuing a human, Michael Corvin, for experimentation; Selene captures Michael herself to find out what the Lycans are up to. Along the way, Selene not only discovers a mutinous plot to destroy the Vampire Elders, but also a shocking revelation about her father-like Elder, Viktor.
In Underworld: Evolution, Selene takes Michael to a Vampire safe house and plans to return to Viktor's estate to awaken Marcus, the last Vampire Elder. Marcus confronts her, after being wakened by Lycan blood. While on the run from Marcus, Selene and Michael discover that Marcus is the first Vampire, and that he plans to free his imprisoned brother, William, the first and most savage Werewolf. It is revealed Alexander Corvinus is the first of the Vampire and Lycan lines. He was the only survivor of a plague that wiped out his village. Somehow, his body was able to mutate the virus, mold it to his own benefit. He had three sons, two of whom inherited their father's immortality and were bitten, one by bat and one by wolf, creating the Vampire and Lycan lines. Corvinus' third son, who did not inherit immortality, also carried the Corvinus Strain, hidden away in his genetic code .
Underworld: Rise of the Lycans Primarily focuses on the origins of some people and events leading to the Vampire-Lycan war. The original werewolves were uncontrollable beasts, unable to retake human form once bitten. However, there was a single werewolf who gave birth to a human-looking child. This child carried a mutation of the original virus, permitting him to alternate between human and werewolf form. He was Lucian, dubbed by Viktor as "the first of the Lycans." The Vampires used the Lycans as slaves to be the guardians of their lairs during the daylight hours and labor during the night. However, Viktor's daughter Sonja and Lucian fell in love and she became pregnant. Lucian, the Lycan leader, led a revolt after Viktor killed Sonja to prevent the blending of the species.
A fourth film, Underworld: Awakening, "Kate Beckinsale, star of the first two films, returns in her lead role as the vampire warrioress Selene, who escapes imprisonment to find herself in a world where humans have discovered the existence of both Vampire and Lycan clans, and are conducting an all-out war to eradicate both immortal species."

by Neal Shusterman
After a civil war—known as the Second Civil War or the Heartland War—is fought over abortion, a compromise was reached, allowing parents to sign an order for their children between the ages of 13 and 18 years old to be unwound—taken to "harvest camps" and having their body parts harvested for later use. The reasoning was that, since 100% (actually 99.44% taking into account the appendix and "useless" organs) was required to be used, unwinds did not technically "die", because their individual body parts lived on. In addition to unwinding, parents who are unable to raise their children to age thirteen for retroactive abortion have the option to "stork" their child by leaving it on another family's porch. If they don't get caught, the "storked" baby then becomes the other family's responsibility.
This book gave me chills. Being present at an actual Unwinding process almost brought me to my knees. This book was wonderful and surreal. Can’t wait for Unwholly. 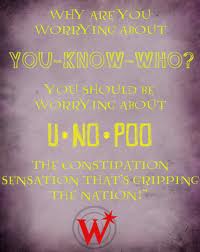 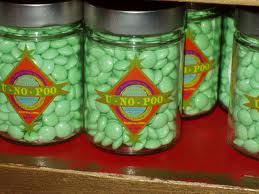 U-No-Poo is a product of Weasleys' Wizard Wheezes that causes constipation in the unknowing taker. The pills can be mashed up and mixed with food or drink. The product was advertised in the main window of the shop in the summer of 1996 in yellow writing and on a purple background. Mrs. Weasley was less than impressed with the slogan, fearing that her sons would be "murdered in their beds" for making fun of the Dark Lord. Ron, however, found the name to be "Brilliant".
Harry Potter once noticed that it seemed as if his classmates had overdosed on U-No-Poo as they practiced trying to cast spells without saying an incantation, as they were purple in the face and straining as they tried to make magic without speaking. 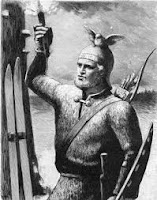 Not much is known about Ull or Ullr. He appears to have been a major god, or an epithet of an important god, in prehistoric times. Possibly in reference to the god, is attested on the 3rd century Thorsberg chape  but medieval Icelandic sources have only sparse material on Old Norse Ullr. Ullr's name appears in several important Norwegian and Swedish place names (but not in Denmark or in Iceland). This indicates that Ullr had at some point a religious importance in Scandinavia that is greater than what is immediately apparent from the scant surviving textual references.
Posted by Dani at Tuesday, April 24, 2012