Our joyous excitement for The Walking Dead premiere on October 12th has reanimated another blogfest idea for the vivacious trio: 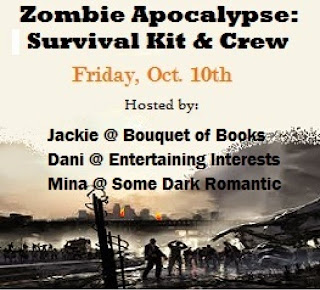 To help build your zombie apocalypse dream team and survival kit, you will need to pick ONE person and/or ONE item for each of the topics listed in the below categories.

(Items you already have on your person: undergarments, shirt, bottoms, socks, tennis shoes & a backpack. If you want special shoes and/or boots, jackets, belt, etc.; those are extra and will need to be listed for one of your items below.)

And since this bloghop is all about having fun, if you have kiddos, we can assume they are safely tucked away in a safe haven somewhere while we’re out in the world fighting off zombies so do not worry.

*The Walking Dead character is the only one that needs to be from a zombie themed entertainment outlet, but please feel free to choose characters from your other favorite books/movies/tv. They may or may not be zombie related. It's all up to you. Just let your imagination flow!

With the characters below, please include the book, movie & TV show your characters are from.

Background:
Outpost
Outbreak
Cause of it
Cure (if applicable)
1 item you NEED to find
1 item you WANT to find
Method of travel

Please display the badge on your blog and join us on Friday, October 10th to build your zombie apocalypse dream team and kit.

And most of all HAVE FUN and BE CREATIVE as you want! 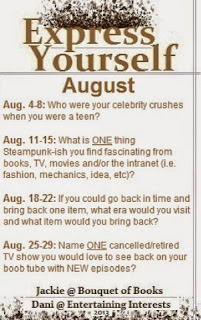 Aug. 11-15: What is one thing Steampunk-ish you find fascinationg from books, TV, movies and/or the internet (i.e. fashion, mechanics, idea, etc)?

What a fun concept. Mechanical animals. I would love a pet made out of gears. 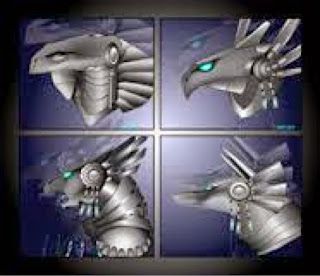 A coal powered animal would be marvelous! Fuel? It goes all day on a few pieces of coal and when it’s done, it disposes a diamond out its backside! A woman’s best friend, two “birds” on “stone”. 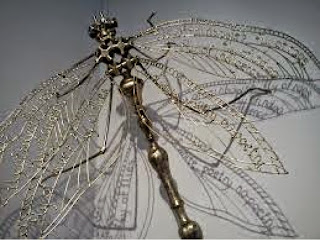 Is there something Steampunkish you love/like!! 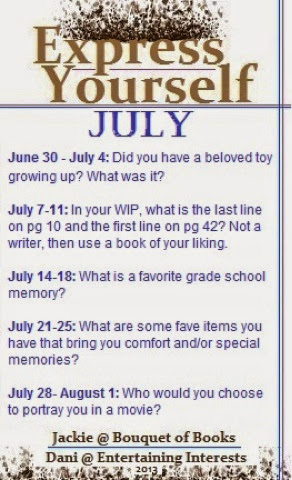 July 21-25: What are some fave items you have that bring you comfort and/or special memories?

Pictures. I LOVE my pictures. I can sit for hours looking thru old pictures and remembering those moments as if I was there again.

I also have a few of my brothers’ things that I adore.

Jackie and I shared who we thought you be great to portray the other person just to bounce ideas off of each other. The person I chose for myself id Melissa McCarthy. My life is a walking sitcom at times and I think she would be great and hilarious playing me. Jackie said Kelly Overton who played Rikki (a werewolf & Alcide’s love interest) on True Blood. She says Kelly resembles me which is a huge compliment! Jackie also said Milla Jovovich cause of the kickbutt characters she portray. Totally compliment there too!! Aug. 4-8: Who were your celebrity crushes when you were a teen?

In the 80’s & 90’s I had posters and pictures of all of my fave celebrities plastered from ceiling to floor on one wall.

However, my top hotties from the 90’s have always been: Heath Ledger, Leo DiCaprio & Josh Hartnett (yes, I still drool)

Do you have any childhood celebrity crushes you wanna share with us?