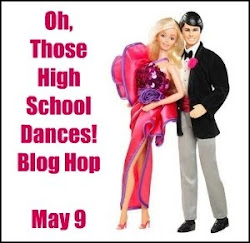 Hosted by the wonderfully talented Emily and Kelley

Here are the rules for participation:
1. Post pictures of your high school dances. (Make sure you tell us which one is you if they're group pictures.)
2. Share with us your funniest high school dance story.
3. That's it!

I couldn't decide which picture or what dance story I wanted to tell so I picked - them ALL. Here goes... 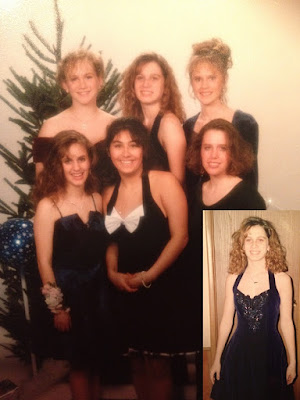 Freshman Semi Formal
Went with my boyfriend, Mitch, at the time but he wanted to leave the dance to smoke pot and drink beer. A really treat that one was. I, however, declined and stayed at the dance. My exact words “No thank you. My mom bought this dress and I plan on dancing until the sweat bleeds through.” The next day I kicked him to the curb. No, I wasn’t mad but I’m not dealing with that kind of drama. 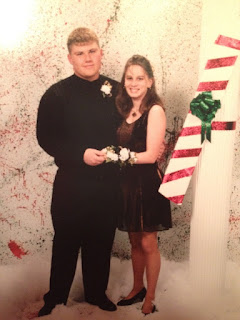 Sophomore Semi Formal
I went with a great guy friend of mine. We had been friends since kindergarten and I wouldn’t have gone with anybody else. He was the funny, teddy-bear type. You know the one – never has a girlfriend cause he is just too cute and loveable to date. Travis busted a beat to kriss-kross and kid-n-play – doing what he called the ‘woolly warm’. You know cause he was a meaty man. His words, not mine. 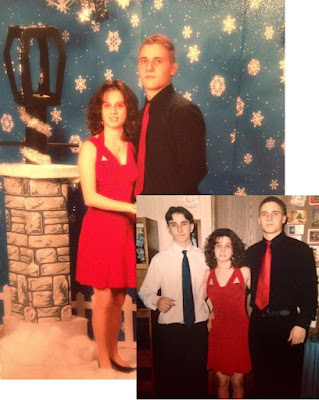 Junior Semi Formal
Went with my Sophomore and Junior sweetheart, David and my brother, Tony. Well I didn’t GO with my brother but he and his girlfriend tagged along with us. Ummmm, just looking at this picture makes me cringe. What was my mom thinking? I know I wore it but she bought it. I look like the consort for Dracula or the evenings street-walking entertainment. *regrettably puts head in hands* 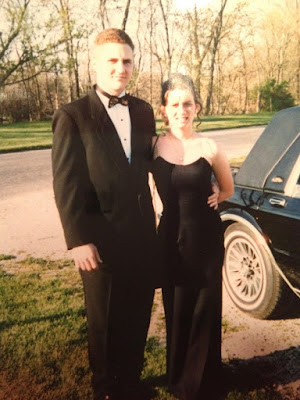 Junior Prom
Again with David. Crap I wish I had that body back. Oh well, I guess if you want a svelt body, HS is the time to have it. So that’s what I keep telling myself anyways. And whats up with the blur on my forehead?! Sun, flash, old camera? *shrugs* Oh well, I looked smoking damnit. 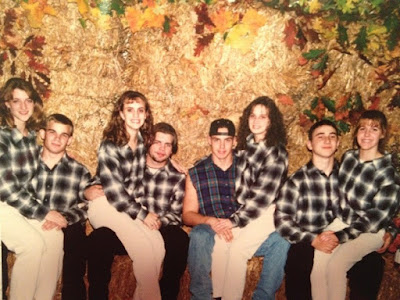 Sadie Hawkin’s (Jen, ??, Lindy, ??, Kenny, Myself, Tony, & Kim)
As you can see David isn’t this one and my partner isn’t matching the rest of the group. I had asked David by presenting him with the shirt. He accepted. Between the months of me asking him and SH, we had broken up. I asked for the shirt back but he never dropped it off and at this point I had told my group that I wasn’t going. And I wasn’t. They had a different plan tho. The whole group showed up with Kenny and said, “You’re going!” Kenny and I had been close since Freshman year. I cried most of the night boohooing over a guy I had broken up with. Girls are so stupid. Aren’t we? Again, I was in the group with my brother. What!? He was my best friend! 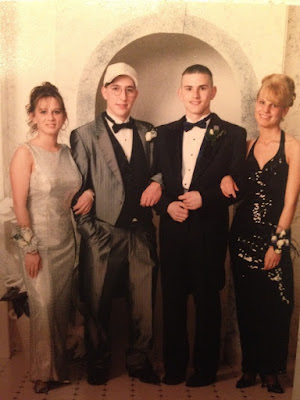 Senior Prom (Myself, Zach, Casey, and Jody)
I skipped my Senior Semi Formal and most of any other dance. I was NOT in the mood. All I wanted to do was graduate and the hell out of that place. I was over it all. When prom came along I was asked by Kenny, Travis, David #1, David #2, and Zach. I turned them ALL down. Not having it. I went to school full time, had a full time job, and just wanted to concentrate on my grades. I even quit cheerleading, track, cross country, and volleyball.
So as I’m standing behind the counter at Krogers, Zach comes strolling in with two of his friends. He disappears and a moment later reemerges in my lane. On the conveyer belt is a bottle of Dew, a candy bar, and a single rose. I scanned his items, entered in the code for the rose, and asked, “So who are you asking to prom?” (all the guys presented a gift when asking) he says while I’m standing there with the flower in my hand, “You.” I couldn’t do it – turn him down that is. I said, “Sure, ok.” And that was that.
I went out and bought a dress, this made my mom very happy. Told him what color tux to get and told him, “This is NOT a date and you may come as comfortable as you want.” As you can see he wore and baseball cap, but it was tasteful.
At the end of the night he snuck in a kiss. Punk!
Posted by Dani at Wednesday, May 09, 2012