Ok, ok... did anyone see Mermaids: The Body Found this weekend on Animal Planet? It was featured during Monsters Week. Anyways ... talk about freakin' me the freak out. Personally I thought the creature on the beach was a bit fake looking and really ... did those two boys really just "stumble" across it? No?! Yeah, me either.

Oh, don't get me wrong, I would flippin' keel over and die if Mermaids, Mermen, Merperson's were are real. I mean, where did all the legends come from anyways? And I'm not just talking about Mercreatures, I'm talking about all the kit-and-cuboodle. Vampires, Lockness, Werewolves, Ghosts, Fairies, and so-on. Ya know - the things that go bumps in the night.

The legends had to come from somewhere, right?! 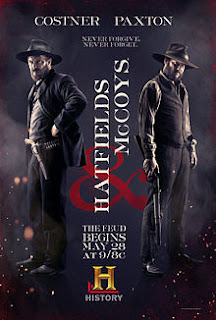 Last night I stayed up WAY past my beddiby to watch Hatfields and McCoys. You know ... the damned feud over a pig. A PIG!

My opinion (which really means nothing) is ... the pig wasn't the cause of the feud. It was mearly the straw that broke the camels back.

Randolph "Ole Ran'l" McCoy was pissed the William Anderson "Devil Anse" Hatfield went AWOL and left his war brothers behind. Hey, Hatfield told McCoy that it was a fools mission to carry on and he wasn't wrong. After Hatfield left, McCoy and seven other survivors were housed in a prison camp in OH. After the war was over, McCoy came home to a town the Hatfields ruled.

The Hatfields took back what was wrongfully stolen by the McCoys and it didn't sit well with Ole Ran'l. Then here comes a Hatfield strolling along with the runaway pig Randolph family lost. It was the cottonpickin' ear mark.

During Trial a McCoy flopped and sided with the Hatfields. Everything went downhill from there. All Hell broke loose.

Men were killing one-a-notha. Y'all.

Johnson Hatfield and Roseanna McCoy couldn't be together. And it left off with Devil gathering fella's up to rescue his boy who was to be murdered by dawn.

Did anybody else stay up too damn late to watch it? *Yawns*

What did you think of the Mermaids? Real/fake?

Who do you side with? Hatfields/McCoys?

Are you related to them? Their kin-folk are everywhere. I researched it! Honest!
Posted by Dani at Tuesday, May 29, 2012