Let the Games Begin! The Tributes

The Hunger Games movie is fastly approaching, and I'm one of those who do my research of the actors protraying my favorite characters. Why? Well I hate to be disappointed. Good thing I did. Gale is not the Gale I pictured and Thresh, I pictured more muscular than the actor who is portraying him. This way I'm prepared and used to the actors. I hate going into a movie with expectations and having them crushed. Now I'm at the movies with my mind on why this actor was picked instead of the one I imagined; when I should be enjoying the movie.

Not to mention names *softly coughs Twilight* but I’m glad Catherine Hardwicke isn’t directing the first movie to Hunger Games. Having the director of Pleasentville (a movie I really enjoyed) & Seabiscuit, Gary Ross, I’m sure THG is in good hands and we, the audience, will get what we are expecting.


Without further ado… LET THE GAMES BEGIN!
Now some of my discriptions are vague for most of the Tributes. To put it mildly... the Cornucopia was a bloodbath.
District 1 ~ Marvel & Glimmer (Career Tributes)

Marvel's name is unknown to Katniss until the Victory Tour in the second book; throughout The Hunger Games he is simply known as "the boy from District 1".
As a Career tribute, Glimmer teams up with Cato, Clove, Marvel, and the tributes from District 4. She is from District 1, which specializes in making luxury items for the Capitol. She is described as very beautiful, being tall with long blond hair and emerald green eyes.

Katniss considers Cato to be her and Peeta's most fearsome opponent because of his size and strength, skill with many weapons, and savage pleasure in killing. Like most Careers, Cato has complete confidence in his abilities and expects that he will be the victor. Katniss believes he is not completely sane after seeing his reaction to the destruction of the Careers' food supply.

Clove is arrogant, strong, and can use many weapons, especially knives, and she is known to not ever miss her target. She has a special hatred of Katniss because of her high training score. Katniss attempts to kill her with the tracker jacker nest. Like Cato, she enjoys killing, as evidenced when she captures Katniss at the Feast and plans to give her the most torturous death possible.

Male Tribute is able to rearrange and reactivate the land mines at the start of the Games to protect the food the Careers have gathered, resulting in them allying with him despite his not being a Career Tribute.

Like most District 4 tributes, the Female Tribute was part of the Career alliance. ﻿ 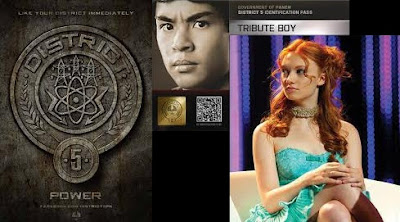 Katniss gives her the nickname "Foxface" after seeing her on TV when they announce the contestants of the Hunger Games, describing her as "a girl that looks like a fox." Katniss shares this nickname with only Rue and Peeta. Foxface's real name is never revealed. Clever and evasive, she uses ingenious strategies, such as hiding in the Cornucopia at the Feast, in order to survive. She avoids contact with other tributes, but relies on them for food; she steals just enough food to survive, but not enough to arouse suspicion that any food is missing.
BEWARE OF THE NIGHTLOCK!

All I can say is LET THE BACKPACK GO AND RUN!

He is described as having a bad leg.

Thresh has the same dark brown skin and golden brown eyes as Rue, but is not otherwise similar in appearance. Katniss refers to him as a "physical wonder" as he stands easily over six feet tall and is very well-built, possessing "muscles like an ox" which give him immense strength. Thresh is quiet and solitary, answering with single words during his interview with Caesar Flickerman. During training, the Careers, recognizing his strength, invite him to join their alliance during the Games but he turns them down. He receives a ten in training, tying him with Cato. 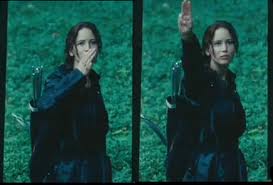 Rue and Katniss become allies. She is 12 years old, with dark brown hair, skin, and "golden brown" eyes. She is similar in size and demeanor to Katniss' sister Prim, which is a major factor in Katniss' decision to team up with her.

Katniss is normally quiet in school and does not bother with gossip and social matters. She lives with her mother and younger sister, Primrose, in the poorest district of Panem, District 12, which is in charge of mining coal for the capitol. Her looks are typical for those from the Seam. Long black hair, which she wears in a braid; olive skin; and gray eyes.

Peeta is described as being "medium height with a stocky build," having "ashy blond hair that falls in waves over his forehead" and blue eyes. He is the town baker's son and is talented in baking breads and icing cakes, which proves to be an unexpected asset to him in the arena, when he can camouflage himself effortlessly.﻿
Posted by Dani at Friday, March 02, 2012

Email ThisBlogThis!Share to TwitterShare to FacebookShare to Pinterest
Labels: The Hunger Games, Tributes