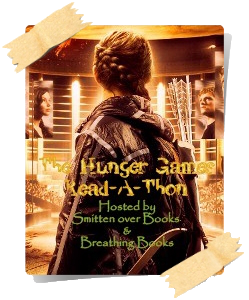 If you want to join in on the fun, head over to Smitten Over Books & Breathing Books to learn more about this awesome event and begin reading what I believe is one of the best book series out there! And if you have read the books, feel free to read on and respond with your own thoughts and answers. I would love to hear them. Let the games begin!! Remember; be cautious on giving away MEGA spoilers! Give at least a warning if there are major spoiler bombs along your post.

1. Imagine one day waking up and found yourself in Panam. What district would you be in and why? To give you an idea, here’s a list of the 12 districts and their designated jobs.

ANSWER: I would want to wake up in District 4: Fishing, for two reasons. *Spoiler of future character* 1.) I’d want to be on Finnick Odair’s good side from the get-go. And 2.) Fishing a great skill to have for survival. Do you know how many different snares you can make out of fishing line? Or what kind of weapon’s you can make with hooks? Think about it.

2. The Reaping Day was one of the dreaded days by district 12. If you were picked that day as one of the tributes, what would be you initial reaction?

ANSWER: My initial reaction would be what any other persons would be: SHOCK. Plain and simple. I would be shocked that my un-lucky “number” was called. Then the realization that I, and I alone, held my fate in my hands, which would then cause me to strategize.

3. You are a tribute and you mentor is planning the best strategy for you to win. What do you think will be your best selling attribute and/or skill?

ANSWER: Hmmm… best-selling attribute or skill… well, being from District 4 I’d have to say using my knife. Those fish aren’t going to filet themselves are they? When it comes to willing a knife; I’d watch your necks if I were you. I’m not so bad with a spear either. Learned early on in life that a spear cannot only snag my meal for the day, but can also keep my enemies at bay. I’m sure it would suck getting a spear to the heart.

4. You were not picked but you sister/bother/father/mother was, would you sacrifice yourself for them a la Katniss or would you keep your ground a la Peeta’s brothers?

ANSWER: Seeing how this is a “game” for kids; I wouldn’t have to worry about my mother or father. HOWEVER … this is a no brainer à I’mma a la Katniss kind of girl. I like to be in control and what better way to protect my family then to take the reins and head in to battle myself.

5. Time for the first impression segment. What is the first thing that came into mind when you think of:

6. Look up. Who is the character that leaps out to you the most? Why?

ANSWER: Probably Cinna. I truly loved this man. He had Katniss’s back. Sure each team has always had their tributes back, it’s their job. BUT Cinna and his team, in my opinion, supported Katniss in a way that made me feel like she was his favorite. I think he knew Katniss would be a game changer even outside of the arena.

7. Do you think Peeta ever thought of winning The Hunger Games even if it means killing Katniss in the process? Why or why not?

ANSWER: Ummm, of course! I don’t care how in love someone is, they are thinking of winning at one point or another. Now ask me if I would kill the one I love? à YES! Why, I have a family at home waiting for me. ME! Not the one I love. Does this make me heartless? Not at all. If I was heartless then I wouldn’t be thinking about the ones back home.

8. (Refer to page. 40) Fill in the blanks: The Peacekeepers are back too soon and Gale asks for more time, but they’re taking him away and I start to panic. “Don’t let them starve!” I cry out, clinging to his hand.

ANSWER: “love you.” Smart on Suzanne’s part on not having him finish this line. I think it would have been changed the dynamic of the story for me cause I was rooting for Peeta the whole time. I think if Gale was allowed to finish saying what he wanted Katniss to remember, she would have either killed Peeta for sure or I would have liked Gale better.

9. Most memorable/favorite scene in Part I “The Tribute”?

ANSWER: When Katniss shot her arrow at the Gamemakers. I mean… come on! Like I said: Katniss = Badass!

10. I know it’s too early to say, but iff there was something you want to know more about or you would want to be elaborated, what would it be and why?

ANSWER: I would have to reread the books but what if two names would have been picked from the same family? A brother and sister act? I would like to have seen that played out. But I like that kind of drama.