Let The Games Begin! The Love, The Help, The Others

Last week I posted about the Tributes that will be portrayed in The Hunger Games film. This week it’s all about the Benjamin’s everyone else. From the Capitol to District 12.
And so there was a love triangle. Isn’t there always? The boy to call Katniss – “Catnip”
Gale Hawthorne 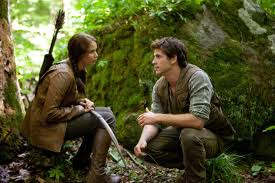 An 18-year-old boy who is Katniss's best friend and hunting partner. Like Katniss, he has black hair, olive skin, and gray eyes. While hunting, the pair combined their respective talents, his at trapping and hers at archery, to become a highly effective team. Their success makes them fixtures at District 12's black market, the Hob, where they trade their illegal game for other valuable items. Gale has three siblings: Rory, Vick and Posy.

Nicknamed "Prim", is Katniss's younger sister. She was 12 years old with blonde hair and blue eyes. Her name was chosen at the reaping for the 74th Hunger Games, and it was in order to save her that Katniss volunteers in her place.

She is Katniss's mother. She was raised in town as the daughter of an apothecary, and subsequently had a fairly comfortable life. She gave it all up to marry Katniss's father and move to the Seam, where she lived in impoverished and starvation-level conditions. 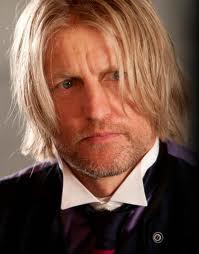 A "paunchy, middle-aged man" who was the victor of the 50th Hunger Games. Back 24 years before the series begins, he became the victor for District 12. After winning his games, he became an alcoholic and had spent almost all of his intervening life intoxicated to the point of embarrassment. Being the only surviving Hunger Games champion from District 12; one of only two in the history of the games. Haymitch is forced to mentor all of its tributes. He is often sarcastic and anything but sober. However, when pushed, he emerges as the pair's greatest advocate and shows himself to be astute as he guides his charges in a cleverly designed, unorthodox strategy aimed at ensuring the survival of both tributes. 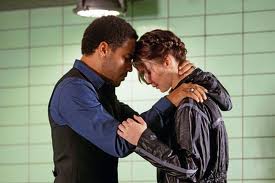 Katniss's stylist, responsible for her public appearance. After designing the spectacular outfits of the opening ceremony, he nicknames Katniss, "the girl on fire." Despite his professional interest in image, he sees through the superficial show of the Games to their cruel basic, using outfits as a way to prompt hypothetically risky notions. 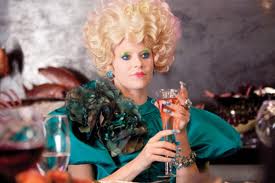 A capitol-born chaperone who gets stuck with District 12 in the Hunger Games. At first, she loathes her attachment with District 12. Effie later becomes attached to Katniss and Peeta. She has bright pink hair [wig]. She seems totally unaware to the hardships of District 12, although whether this behavior is intentional or not. She is very strict about manners and is always punctual. 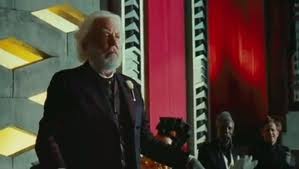 Is the dictatorial ruler of the Capitol and all of Panem. Though apparently laid-back, this hides a psychopathic mind. He first appears in The Hunger Games when he crowns Katniss and Peeta as victors. 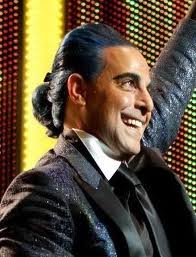 A popular Capitol reporter who is famous for conducting interviews for the Hunger Games for more than 40 years. Described as wearing a "ceremonial suit, midnight blue dotted with a thousand tiny electric bulbs" and having a heavily powdered face and hair that the color changes every year as does the tributes, giving every different games a different color, he is somewhat freakish in his appearance to Katniss's District eyes. He is easygoing with most, if not all people, and is excellent at making the tributes "shine."
Avox girl 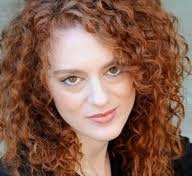 A servant girl whose tongue has been cut out for being a traitor. She has red hair, porcelain skin, and striking features. Because of her inability to speak, Katniss does not know her name or anything about her. Katniss recognizes her from when she and Gale witnessed the girl's capture and the death of her friend. Katniss later speculates that she is a runaway from the Capitol.

The Head Gamemaker during the 74th Hunger Games who lets both, Katniss and Peeta lives. 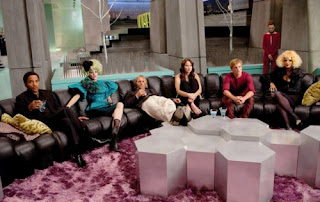 I would love be on this couch!
Cinna, Effie, Haymitch, Katniss, Peeta, Avox (standing in red), etc...

Is there anyone I haven't listed you'd like to see portrayed in the movies?
Posted by Dani at Wednesday, March 07, 2012

Email ThisBlogThis!Share to TwitterShare to FacebookShare to Pinterest
Labels: The Hunger Games