Blogspiration - What Book Inspires You 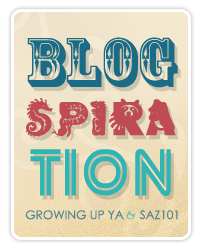 Blogspiration is a brand-new weekly meme hosted by GrowingUpYA and Saz101. The meme was created to help spark inspiration among bloggers, readers and writers alike. An inspirational quote/picture/video  is posted weekly, on the day of the author's choosing, so that it may inspire creativity, conversation or just a little SOMETHING.
This Weeks Blogspiration is ... What book inspires you?
It's so hard to pick one book when the book(s) that inspire me usually come in a series. Ok ... ok, I'll pick one book series out of my many favorites. 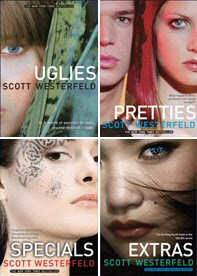 The story follows a teenage girl named Tally Youngblood who lives three hundred years from now in a futuristic city. Previously to the book, our world (known as the "Rusty World" because at the time we have used so much metal that over time had deteriorated and rusted) had collapsed because of the creation of an "oil bug" that caused oil to combust when it came into contact with oxygen. The people who survived the collapse decided that action had to be taken to prevent this happening in the future. The survivors then spread out into cities, where they gradually became self sufficient and eco-friendly, and integrated the operations into the world. One of the main points of the operation is to extend the halo effect to all citizens, which was an idea that beautiful people had better fortune. This "halo effect" helped in reducing disputes and violence. They were not satisfied enough with the results, so they decided to develop a brain lesion (purposely damaged brain tissue) that made people compliant and pleasant. Some people became aware of the operation, and the lesions, and decided that they couldn't live in a place where something of that magnitude was happening. Villages like "The Smoke" were established to give citizens a place to go to avoid the lesions, and to be separated from society. The Smoke was also a place where two outlaw doctors named Maddy and Az studied how people who didn't have the brain damage behaved to determine its effects and possibly discover a cure.
Posted by Dani at Monday, February 27, 2012