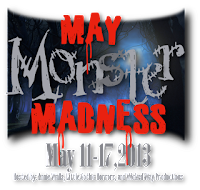 Today is Day 5 of the 2nd Annual May Monster Madness! Hosted by Annie Walls and her blogger buddies, Emma @ Little Gothic Horrors, and Ked @ Something Wicked this Way Comes.

How does May Monster Madness work? Well, it's a blog hop featuring posts about monsters! Anything you can think of as long as it has something to do with monsters... crafts, lists, movies, funnies... anything!

I'm sitting here whoofing down an egg and ham McMuffin and Coke... breakfast of champions, pondering how I forgot my breakfast and cell on the counter at home - again. Ah yes, I have kids, lack of sleep cause the 3 yr old didn't want to sleep (she is a little monster in her own right), and apparently I'm human *gasp* and this sort of crap happens. Anyways...

If you've been around lately then you know Saturday I highlighted Urban Legend monsters, Sunday was The Descent, Monday featured Mutants, and yesterday The Creeper graced my page. Today, Vampires will be stopping by. And not the kind who sparkle. Or the Brad Pitt/Tom Cruise lookers either. I'm talking about the Alaskan kind.

30 Days of Night is not only a three-part mini series but was also made into an film in 2007. Which later spawned a few more projects. Vamps, who are sensitive to sunlight, search out Barrow, Alaska as the 30 days of night draws near. Once the month long darkness takes hold, nothing but murder and feeding thrives. Sheriff, Eben Oleson, has to inject himself to keep the rest of the survivors safe.


Have you encountered 30 Days of Night - whether it's the movie or an Alaskan trip? What opinions would you like to share about it?

Tomorrow - I will share my favorite monster and I'm sure to many of you it's no surprise.
Posted by Dani at Wednesday, May 15, 2013

Email ThisBlogThis!Share to TwitterShare to FacebookShare to Pinterest
Labels: 30 Days of Night, May Monster Madness, Vampires