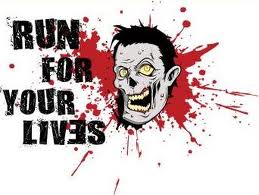 OKAY…
Wow what a weekend!
Saturday rolls around. I plop – literally – out of bed at 6am. Shower, brush my teeth, squeeze into my new Danskin jogging leggings, and slip into my t-shirt. Am I ready for this? Who the hell knows? I pull my hair up into two small pigtails, find some ankle socks, and glide into my running shoes.  I’m skipping breakfast cause I’m hopeful for some Mc. E. D’s.
The hubs comes shambling down the stairs, grabs a Dew and the marches back upstairs to get ready.
Once mom arrives, the two of us stumble out to the car; drop ourselves to our seats and both give a loud “UGH”.
About two minutes later we arrive at a friend’s, pick them and on down to Knightstown, Indiana for 2012, Run For Your Lives , Zombie 5k.
The lines to get out gear took a total of 15 minutes.

Along the way we met some characters.

Obstacles consisted of several streams, river beds, climbing walls, climbing ropes, barely making it up steep hills, dark buildings which had hanging electrical shock cords (PLEASANT!), a maze, maneuvering under and over planks, logs, and trees, and of course running around OR over zombies.

I managed to keep all 3 of my flags through the first mile. OH! Did I mention 15 minutes into this thing I wanted to quit. I had left my asthma inhaler behind. Damn me! I know, what a loser, but I stuck it out. My hubby – who did not run the course – would have been so disappointed and pissed that I paid ninety bucks to quit. Anyways I stood up and thought “I can do this!” First mile entailed a buttload of zombies, two creeks with ice cold refreshing water, and two walls which involved two guys getting down on all fours so us girls could step on the backs and climb over. How knight-in-shining-armor!
However within the second mile I lost 2 flags. DAMN! Second mile trek featured four waterways, swing under downed trees. At this point a very tall man swung, landed on a loose boulder and face planted into a tree under the water. He came up with a bloody nose and part of the tree he busted with his face. He stood and kept on going. At this point we had about 20 misfits in our group and the only 2 participants that had flags was the guy that kissed the tree and ME! Yup, I’m still going.
Third mile was the hardest. Three tall, massive hills, rope ladder which gave burns in the most unwanted spots, open fields of 20 or more zombies, the maze, the building of electricity, money bars, and the electrified fence.


When we entered the finish line there were two lines to pass through – INFECTED or ALIVE. I came sloshing up to the line feeling pretty infected and heard the word – ALIVE!!!

Huh, me? I looked down and low and behold I carried my last flag across the finish.
﻿
﻿IT WAS DA BOMB!!!!
If it comes to your area, you NEED to do it! But leave the bath salts at home. 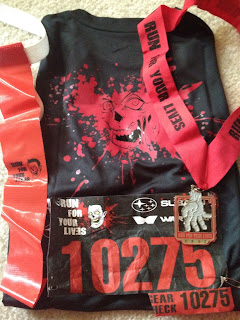 Email ThisBlogThis!Share to TwitterShare to FacebookShare to Pinterest
Labels: Run For Your Lives, Zombie 5k