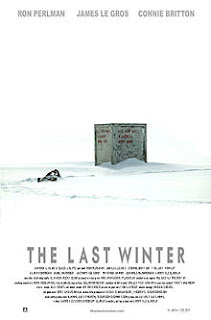 An American oil company KIK Corporation is building an ice road to explore the remote northern Arctic National Wildlife Refuge, seeking energy independence. Independent environmentalists work together in a drilling base headed by the tough Ed Pollack (Ron Pearlman) in a sort of agreement with the government, approving procedures and sending reports of the operation. Maxwell (Zach Gilford) is found dead and naked on the snow. James Hoffman (James LeGros), an environmentalist, suspects natural gas containing hydrogen sulfide may have been leaked out as a result of runaway climate change (arctic methane release). The gas might then be provoking hallucinations and insanity in the group. After a second fatal incident, he convinces Ed to travel with the team to a hospital for examination. However, weird events end up trapping the group at the base.
One of the characters presently opines that Nature itself has turned against mankind. Documentation and research found in an abandoned shack in the middle of the Arctic by another team member suggest that the Earth is releasing The Last Winter. This implies that the rapacious, virus-like behavior of oil-seeking humans has resurrected the 'ghosts' of the fossil-fuels being siphoned out of the ground. The chief catalyst here is allegedly the Spirit of the Wendigo. These ghosts and other bizarre occurrences kill off most of the remaining characters. In the penultimate scene, Hoffman must decide whether to fire a flare gun at a ghost stalking Pollack, or up into the air to summon help from a nearby town, opting for the latter. This action causes the apparition to focus on Hoffman instead of Pollack, and it grabs him and carries him off. The scene then segues into a montage of past life images which interrupt themselves long enough to reveal Pollack being attacked and presumably killed by a trio of spectral creatures.
The ending scene is that of the only surviving, Abby (Connie Britton) waking up alone in a deserted hospital with no recollection of arriving there. A news anchorman is broadcasting over a television in the waiting room about natural disasters occurring nation-wide. She discovers a male employee who has hung himself from the ceiling. She proceeds outside, and the camera's perspective switches to a claustrophobic overhead shot that gives away very little of what she is witnessing. There are pools of water on the ground nearby. In the background she hears car alarms and the sound of the wind, as well as a fluttering noise similar to that made by the murderous "ghost" creatures further north in the Alaskan snow fields.
I want more. I want to know what she say and why she wasn't affected by it. And was it all real or a hallucination? 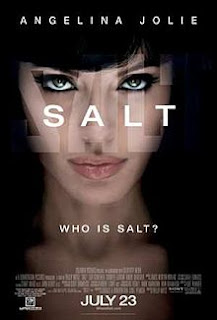 SALT
In a prison in North Korea, CIA agent Evelyn Salt (Angelina Jolie) is being held and tortured on suspicion of being an American spy. Released as part of a prisoner exchange, she is collected by CIA colleague Ted Winter (Liev Schreiber) and her boyfriend, an arachnologist Michael Krause (August Diehl). Salt admits her true occupation and genuine feelings to Krause but warns him about the dangers. Mike doesn't care and tells her on the return home that he wants to spend the rest of his life with her.
Two years later, on their wedding anniversary, a Russian defector named Vasilly Orlov (Daniel Olbrychski) arrives at the CIA. Salt interrogates him with Winter and agent Peabody (Chiwetel Ejiofor) observing. Orlov tells her about "Day X", a Russian plot to destroy the United States by using English-speaking sleeper agents trained from birth. Agent "KA-12" will kill Russian President Boris Matveyev (Olek Krupa) at the funeral of the American Vice President. Orlov reveals that KA-12 is named "Evelyn Salt".
Salt, shocked by the accusation, calls her husband. He does not answer, and she realizes he is in danger. When Winter and Peabody decide to detain Salt, she escapes and makes her way back to her apartment. Finding signs that Michael has been kidnapped, Salt takes her weapons and one of Michael's spiders.
After evading CIA pursuit, Salt travels to New York City and checks into a hotel, where she extracts venom from the spider. Salt makes her way to the church, where the Vice President's funeral is taking place. Salt apparently shoots and kills him. Peabody captures her, but she escapes. On her way to a barge where Orlov is holed up with other KAs, Salt remembers, in a series of flashbacks, growing up in the Soviet Union. Salt and Orlov have talk and as a test of her loyalty to himself, he has Michael killed right in front of her but she does not react. He then briefs her on the next part of her mission. Salt then kills him and the other agents.
Salt continues with Orlov's mission, meeting a fellow KA agent named Shnaider (Corey Stoll), a Czech NATO liaison. In a series of violent hand-to-hand battles, *this is where all the secrets are relieved so I’m not going to spoil it for everyone*
I’m not a huge Angelina Jolie fan and was apprehensive about watching it. But I went against my better judgment and went with the masses. I do have to say that I liked it
êêêê¶
Posted by Dani at Wednesday, January 04, 2012