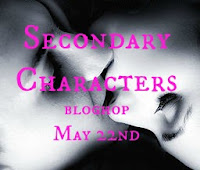 All of my faves come from novels.

Aphrodite LaFont - Former hag from hell and Zoey's (main character) enemy in the first book. Oracle and Prophetess and love interest to Darius, over time she becomes a “friend” of the nerd-herd. Drips with sarcastic and cynical slurs, slams, and put-downs; tongue-in-cheek personality, she stands out as my all-time favorite character from the House of Night series and maybe even EVER.

"My cat is not insane, she's just a really good actress"
"Hey, Venus, I have two words for you, Re. Bound. Good luck with that"
"Oh for craps sake. You're not dying again, are you? It's seriously inconvenient when you do that."
"Dorkamese twins"
"Nerd herd"
“Oh for shit’s sake. This isn’t Hogwarts,”
“Well, that’s a miracle. Someone call the Vatican,”

Kat – A spunky character where, if there is any ‘insta-girl-love’ in Alice in Zombieland, it’s between Kat and Ali (main character). Kat immediately decides that Ali is going to be her new best friend – might even make top spot, and you really see these two characters love each other through the book. Ali is continually honored by how amazing of a friend Kat is all while she feels guilty for the things that she’s keeping from her. Another chick that doesn’t take any crap and throws out verbal assaults with her sarcastic and cynical verbiage. She ranks a close second to Aphrodite.

“Actually it’s just a matter of time before I feed your balls to my dog.” In an aside to me, she said, “Remind me that I need to buy a dog.”
“U thinking what I’m thinking? Dark alley, brass knuckles & prison rules.” (in a text)
“One time frosty left me two seconds after we finished, just kind of pulling on his clothes as he jumped out my window, and I was like, are you freaking kidding me with this, but of course he couldn’t answer because he freaking wasn’t there!”
“Don’t make me slap you out of your crazy.”

Luna Lovegood - Ravenclaw student one year younger than Harry in the Harry Potter series. She is described as having straggly waist-length dirty blond hair with grey eyes. Her father, Xenophilius Lovegood, is the editor-in-chief of The Quibbler. When Luna was only 9 years old, her mother died while performing spell experiments. Luna witnessed the accident, which enabled her to see Thestrals. Luna is at first socially isolated at school, but she appears to have the rare quality in that she cares little about what others think of her. She is unique and quirky. After school Luna pursues a career that is the wizarding equivalent of a naturalist. She also accepted that some of her father's beliefs were, after all, not so true. She married a fellow naturalist named Rolf, the grandson of Newt Scamander. Luna and Rolf had twin boys, Lorcan and Lysander. After Harry and Ginny are married, they name their daughter Lily Luna.

"A Wrackspurt - they're invisible, they float in through your ears and make your brain go fuzzy," she said. "I thought I felt one zooming around in here."
"Mistletoe," said Luna dreamily, pointing at a large clump of white berries placed almost over Harry's head. He jumped out from under it. "Good thinking," said Luna seriously. "It's often infested with nargles."
"I've been able to see them ever since my first year here. They've always pulled the carriages. Don't worry. You're just as sane as I am."
"I enjoyed the meetings, too. It was like having friends."

Ben – 6’4”, he is a gentle giant with Autism, often called “the smartest person” in the second installment of the Ashfall series, Ashen Winter. His specialty – military weapons, tactics, and lingo. The part that stuck out the most is when Ben helped a man, his wife, and their son get a better strategic stance (field of fire) when wanting to kill Ben, his “Sister Unit” Alyssa, and Alex (main character). I laughed and so did the characters. Mike Mullins did a great job with Ben and highlighting that Autism isn’t a crutch.

“That is an easy tactical problem,” Ben said. “Prepare an ambush. Use the unknown persons want as a lure. Would the Sister Unit suffice as a lure?”
“Their tactical position is excellent,” Ben replied. “We could take cover on the opposite side of the truck, but if we climb the snow pile or move down the road in either direction, we’ll enter their field of fire.”


Thomas Sabin – The geeky kid in school with a dry sense of humor and an uncle who is into voodoo, has a thing for Carmel – the IT girl.  Thomas and his grandfather are an important part in solving the mystery behind, not only Anna, but the stuff going on with Cas (main character) too – and let’s not forget he is integral in saving Cas in Anna Dressed in Blood series.
He reminds me of Shaggy from Scooby Doo.

Also, the 3rd annual YA Crush Tourney has begun. The YA Sisterhood has 4 bloggers helping out with the nominations: