This weekend I watched three, yup, three movies.
First one: The Lazarus Project. Can we say Shutter Island? Anyone? 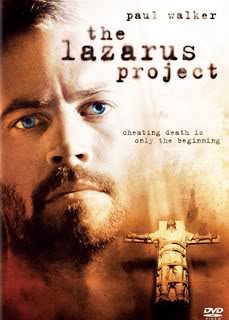 êêê¶¶
The premise to this movie is when Ben (Paul Walker), a reformed criminal, unexpectedly loses his job, he turns to his ex-con brother which leads to a laboratory robbery gone wrong. When Ben is sentenced to death, he wakes up from his lethal injection near a psychiatric hospital in a small town in Oregon, where he is picked up by a priest and told that he has been given a second chance from God and to begin work as the groundskeeper at the hospital. As time goes on, and with a wife and daughter he left behind, he wonders whether he has cheated death or become part of a far more sinister plan after seeing, what he believes are, demons. After downloading a file he found on himself, mailing to his wife, he confronts the priest and a man he believes to be and angel. They confirm what he has believed all along.
Second movie: Fame (2009) 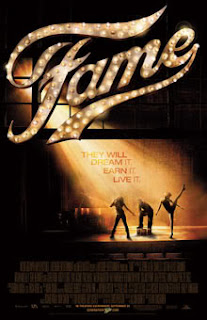 All I can say is ... watch the first one. It's much better. This remake is based loosely on the original. With young wannabe kids wanting to grow up and make it big. Some make it, some don't. Some go home, some stay. They fall in and out of love and then back in again. *Yawn*
êê¶¶¶
Cast:
Students 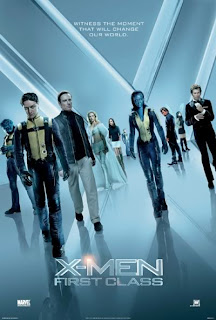 êêêê¶
At the Nazi concentration camp, we see in the first X-men movie, in Poland in 1944, scientist Dr. Klaus Schmidt observes young Erik Lensherr bend the metal gate when separated from his mother. Schmidt orders Lensherr to similarly move a coin on a desk, and kills his mother when the child cannot. In his grief and anger, Lensherr's magnetic power manifests, killing two guards and destroying the room, to Schmidt's delight. At a mansion in Westchester County, New York, young telepath Charles Xavier meets homeless young shape-shifter Raven. Overjoyed to meet someone else "different", he invites her to live with his family. We jump to 1962, an adult Lensherr is tracking down Schmidt to take revenge. We meet Emma Frost (telepathy/diamond shapeshifter), and Azazel (Red “demon” and telporter; Nightcrawler’s father) and Riptide (a tornado wielding mutant). MacTaggert, seeking Xavier's advice on mutation where they meet young scientist Hank McCoy, a prehensile-footed mutant; Xavier and Lensherr find stripper Angel Salvadore; taxi driver Armando Muñoz, who takes the code name Darwin; Army prisoner Alex Summers, who calls himself Havok; and Sean Cassidy, who dubs himself Banshee. Raven takes the name Mystique. McCoy offers Raven his cure for her appearance, but she refuses. The cure backfires on McCoy, rendering him a leonine beast. In a struggle, Xavier keeps Lensherr from destroying the fleets with the missiles, but when MacTaggert fires at Lensherr, a deflected bullet hits Xavier in the spine. Lensherr, remorseful, leaves with Mystique, Riptide, Azazel and Angel. Later on A wheelchair-bound Xavier and the mutants return to the mansion, where he intends to open a school. Lensherr, in a uniform with the helmet and calling himself Magneto, breaks Frost from confinement.
I loved this movie of course. Being a comic fan and a fan of all mutants whether they be x-men or vampires, werewolfs, etc.
The back drop on some of our favorite characters is what makes it so interesting to me. Granted I prefer more action of the previous x-men but to get the early lives and why there is so much turmoil between some of the mutants is what drew me in.
·         James McAvoy as Professor Charles Xavier
o    Laurence Belcher as Charles Xavier
·         Michael Fassbender as Erik Lensherr * / Magneto
o    Bill Milner as Young Erik Lensherr
·         Kevin Bacon as Sebastian Shaw
·         Jennifer Lawrence as Raven Darkholme / Mystique
o    Morgan Lily as Young Raven
·         January Jones as Emma Frost
·         Rose Byrne as Moira MacTaggert
·         Nicholas Hoult as Dr. Henry "Hank" McCoy / Beast
·         Oliver Platt as a CIA agent and head of Division X
·         Ray Wise as the United States Secretary of State.[30]
·         Zoë Kravitz as Angel Salvadore
·         Caleb Landry Jones as Sean Cassidy / Banshee
·         Lucas Till as Alex Summers / Havok
·         Edi Gathegi as Armando Muñoz / Darwin
·         Jason Flemyng as Azazel
·         Álex González as Janos Quested / Riptide
·         Glenn Morshower as Col. Hendry
·         Matt Craven as CIA Director McCone
·         Rade Sherbedgia as Russian General
·         Michael Ironside as a U.S. Navy Captain
·         James Remar as a U.S. General
·         Annabelle Wallis as Amy: A young woman Xavier flirts with in a bar after observing she has heterochromia
·         Don Creech as William Stryker
·         Brendan Fehr as Communications Officer
·         Aleksander Krupa as a Russian Navy Captain
Posted by Dani at Monday, December 19, 2011