*4 random words/descriptions/tools about myself,
*1 blog I adore so much I would like everyone else to follow (it's only 26 new amazing blogs to add to your list if you haven't already),
*1, 2015 novel.
*Which all start with the letter of the day or as close as I could get).

Simple, fast posts so you can read, comment, and move on to the next A to Z blogger. Enjoy!

I'm currently on vacation at my grandfathers, tucked away in a remote nature reserve in Florida... withOUT  Wi-Fi & with my kids (so this should be an interesting "unplugged" week). Which means, my comments will be absent until my return!
C 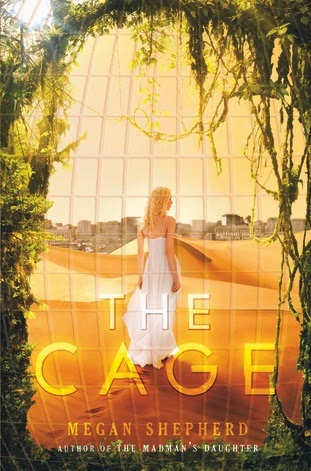 The Cage (The Cage #1) by Megan Shepherd

The Maze Runner meets Scott Westerfeld in this gripping new series about teens held captive in a human zoo by an otherworldly race. From Megan Shepherd, the acclaimed author of The Madman's Daughter trilogy.

When Cora Mason wakes in a desert, she doesn't know where she is or who put her there. As she explores, she finds an impossible mix of environments—tundra next to desert, farm next to jungle, and a strangely empty town cobbled together from different cultures—all watched over by eerie black windows. And she isn't alone.

Four other teenagers have also been taken: a beautiful model, a tattooed smuggler, a secretive genius, and an army brat who seems to know too much about Cora's past. None of them have a clue as to what happened, and all of them have secrets. As the unlikely group struggles for leadership, they slowly start to trust each other. But when their mysterious jailer—a handsome young guard called Cassian—appears, they realize that their captivity is more terrifying than they could ever imagine: Their captors aren't from Earth. And they have taken the five teenagers for an otherworldly zoo—where the exhibits are humans.

As a forbidden attraction develops between Cora and Cassian, she realizes that her best chance of escape might be in the arms of her own jailer—though that would mean leaving the others behind. Can Cora manage to save herself and her companions? And if so . . . what world lies beyond the walls of their cage?
Posted by Dani at Friday, April 03, 2015