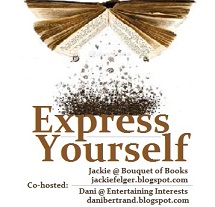 Express Yourself is a weekly Meme hosted by my friend Jackie and myself. We do this every week to learn more about our fellow bloggers and so far we have met some very talented and wonderful people!

This week Jackie and I are asking: What author(s) would you love to have lunch with?

I would LOVE to have a sit-down luncheon with Neal Shusterman. By the time I was done with him, he would hate any line ending with a question (?) mark and the sound of my voice. I find that man uber interesting.