Madeleine over at Scribble and Edit is hosting the Novel Films II blogfest yesterday, today, and tomorrow. I usually don't blog on holidays so I'm posting all 3 days today. Hope you all enjoy my picks!

Day 1: Are there any novels you have seen as films / TV adaptations in which the novel left you cold?
Or a film that surprised you and promoted you to read the novel?

Harry Potter by JK Rowlings - I saw the first two movies which prompted me to start reading the series. The gave more details, however, I loved the movies more.

The Road by Cormac McCarthy - I read the book first and then watched the movie... the novel was so much more! I suggest if you have seen the movie and hated it... don't judge the book by the movie. The novel is WAY better!!

The Hobbit by JRR Tolkien - I read some of the novel when I was in high school but was never much of a reader then. Once I saw the movies, I finished the book. I love the movies!

The Host by Stephenie Meyer - The book was spectacular, way better then her Twilight Saga. But I equally loved the movie. I thought they complimented each other.


Day 2: Which novel that so far haven't yet been made into films /TV adaptations would you like to see and why?

The Chaos Walking by Patrick Ness - This series would make a wonderful trilogy is done by the proper director.

The Circle Trilogy by Nora Roberts - The vampire/sorcerer/sorceress/slayer series is one of my favorites and my first love of this fantasy genre. I would be thrilled to see this come alive on the big screen or even a TV series.

Most of Jonathon Maberry's novels - All thriller/horror novels. I know most people can't stand one more film about zombie apocalyptic reels but I think these would make the zombie lovers very happy.


Day 3: Have you read any novels where you have yet to see the films / TV adaptations? Or seen any films where you are keen to read the original novel?

The Caster Chronicles by Kami Garcia & Margaret Stohl - This movie recieved such horrible reviews which is the reason why I haven't watched it yet. I don't want to ruin my vision of the series with a bad movie like Twilight. I'm guess my curiosity will get the best of me though.

The Mortal Instruments by Cassandra Clare - I REALLY want to watch this!


Also, Express Yourself meme for September questions is as follows and updated in my tabs... 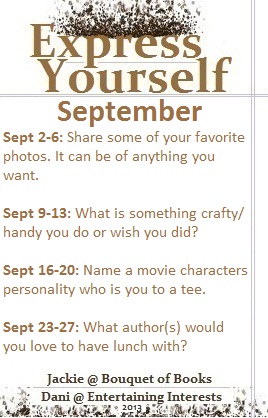 So that's my 3 days of NOVEL FILMS II blogfest! Have an awesome Tuesday!! Hope everyone had a great long weekend... that is if you had a long weekend.