HAPPY HALLOWEEN EVERYONE!!
I can’t believe this month is almost over. It’s truly a bloody bummer.


As I write this I’m jammin’ to a ‘lil Fleetwood Mac; trying to make some last minute decisions for the Spooktoberfest Winner. This was such a hard choice. I could never be judge on American Idol - everyone would win.

Disclaimer: We removed participants that ended up not participating by the cutoff date for easier viewing. Your previous entry number may have changed. Thank you.
Seriously! You guys did such an amazing job and in so many amazing styles. The creativity just floors me. I am blessed to have so many remarkably talented writers in my circle of blogging friends. It’s nice to know the world is speckled with such talent.
Ok enough with all this sentimental bs (which is usually not my style). You guys want to know who the winner is – RIGHT?!
I had the heat down to 10 challengers, then widdled it down to 7, then 5, then 3, then...

THE GROWING WRITER with RANDOMNESS – There was something about this piece which gripped me around my throat and wouldn’t let go. Maybe it was the poison in that bit ‘o candy I ate. I don’t know. This guy was messed up. I’m not sure of his motives but what I do know is it wasn’t just simple revenge. It – simple revenge – would have been projected on only the innocent. He was playing a game of Russian Roulette. Loved it. (Grab the badge and rock it on your page if you'd like)
Ok, Von L Cid, what I need you to do now is email me @ d.bertrand_12@yahoo.com with your fave type of candy - which I’m now leery of giving you in fear of you spiking it. O_o and an address that I can send your goodie bag to.
Yes there is only one winner but The Growing Writer was neck and neck with two others.
And the two RUNNER UP’S are… 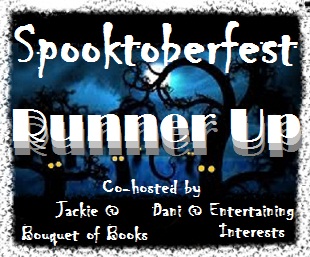 Go HERE to out Jackie's WINNER!
Ohhhh but there are so many great ones!
Friends slices throats to friends pulling pranks.
Death chewing bubble gum to witches enticing children.
Haunted hayrides to haunted mazes & houses.
"Hey who changed the channel? I was watching Bleary Springer!"
Crocked potions to conjured potions.
Creepers in stores to creepers in the night.
Poems & recipes.
Revenge – romance – murder.
And I thought there was plenty for children literature. And a few commercial ideas as well!

What more could you ask for in a Blogfest?!
Now I heard it’s hard to get your hands on certain candies outside of the U.S. Like – let’s say – Reese’s Piece’s in Wales?
I’m curious – tell me in the comments section what candy is hard to get in your end of the world?
Everyone be safe tonight and don’t let the ghouls and goblins get ya!
Posted by Dani at Wednesday, October 31, 2012