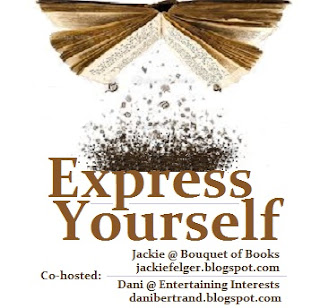 This week Jackie and I want you to Share a Memorable Book Quote for Express Yourself!

Oh and there are tons that stick with me; good and bad.

You know those bad ones from, oh I don't know, like, the Twilight Saga novels by Stephenie Meyer.

"'And so the lion fell in love with the lamb...,' he murmured. I looked away, hiding my eyes as I thrilled to the word.
'What a stupid lamb,' I sighed.
'What a sick, masochistic lion.'"
- Edward and Bella

And again in the woods when Bella tells Edward what he is. Blah, blah, blah. Of course I loved parts of the books and watched the movies. But there is some cringe worthy moments for sure.

On the other hand you have the quotes that everyone recognizes.

And of course I have and love tons of quotes that I could list here but instead I'm going to list a character that has the best one-liners EVER!

Aphrodite LaFont  from the House of Night series by P.C. and Kristin Cast. Like every series I love parts and I hate parts. BUT... I L.O.V.E. love Aphrodite from her b-tchy one-liner slammers to her more serious, kind ones. Mostly she's a straight up b witch but she totally appeals to my more feisty side.

"My cat is not insane, she's just a really good actress"
"Hey, Venus, I have two words for you, Re. Bound. Good luck with that"
"Oh for craps sake. You're not dying again, are you? It's seriously inconvenient when you do that."
"Dorkamese twins"
"Nerd herd"
“Oh for shit’s sake. This isn’t Hogwarts,”
“Well, that’s a miracle. Someone call the Vatican,”

Have a great Monday If you have signed up then you do NOT need to sign up again. It's a one time sign up Linky.
Posted by Dani at Monday, February 25, 2013

Email ThisBlogThis!Share to TwitterShare to FacebookShare to Pinterest
Labels: Express Yourself, House of Night, Quotes, Reading