The ever amazing Kyra Lennon has done it again with her new novel Blindsided.

Here she has given us a little taste of what to look forward too... 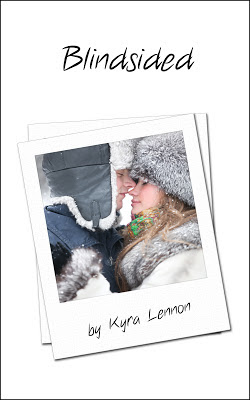 This is a small snippet from the start of Chapter 2, and is from the POV of Isabelle.

Tuning out the sound of Mr. Swift talking about the way writers use and adapt language, I closed my eyes and a picture of him filled my mind.
When my parents had told Georgia and me our cousin, Hunter, and his friend were coming to stay for a few weeks, I wasn’t exactly thrilled with the idea. Don’t get me wrong, Hunter was one of my favourite people in the world, and I wished he lived much nearer than he did, but having someone new in my house made me nervous. It took me a long time to warm up to new people, and most of the time, they didn’t wait around long enough for me to do so.
I met Jesse for the first time when I was twelve, and I thought he was a bit of a dork. He had long, skinny legs and twiggy arms. His hair was a blond mess, and he spent all his time playing football with Hunter, and mostly ignoring me and Georgia.
When I saw him on Saturday morning, in my living room, hair ruffled from him falling asleep on the sofa, my mouth felt like it was filled with sawdust, and I could barely choke out a ‘hello.’
He’d got kind of … gorgeous. He’d grown into his gangly arms and legs, and developed muscles, and the kind of chiselled jaw you think only exists in romance novels.
Right away, his looks put him way out of my league, but when you threw in the fact he was on his way to becoming a football legend in America, he was obviously a guy who wouldn’t look twice at plain old Isabelle Mills. He tried really hard to make conversation, I suppose because he felt sorry for me. I appreciated his efforts, and I think I may have even flirted with him a little over lunch before reminding myself I definitely wasn’t going to get his attention. Boys were Georgia’s area of expertise. She already had a boyfriend, but that didn’t stop the other guys at college from checking her out. She was just so confident, whereas I preferred to sit in the background. The last thing I needed was some prat like Leon Baxter following me around. Lucky for me, that particular creep definitely preferred Georgia, though honestly, I wouldn’t have wished him on anyone. I hated the way he stared at her, making disgusting innuendos. He was the kind of guy who gave all the rest a bad name.
“Isabelle?”
I jumped at the sound of Mr. Swift saying my name, and the rest of the class started laughing. I tried to subtly wipe my chin, just in case I’d accidentally been drooling on the desk while in my trance, and Georgia giggled beside me.
“Sorry, sir,” I said, wishing I could crawl under the desk and hide.
“Welcome back,” he said, smiling. “Are you ready to join in the discussion now?”
I nodded. “Yes, sir.”


Blindsided Synopsis:
After a successful first soccer season in L.A, Jesse Shaw heads to London with his best buddy, Hunter, but his world is turned upside down when a dangerous prank threatens his career and his blossoming relationship with Hunter’s cousin, Isabelle.

Isabelle Mills lives in Notting Hill with her parents and her twin sister, Georgia. When she finds out her cousin is coming to stay, along with his famous soccer player friend, her first instinct is to hibernate until they’ve gone. However, once she meets Jesse, everything changes. He’s everything she ever wanted, but with so many obstacles in their path, can she really risk putting her heart on the line?


Author Bio:
Kyra Lennon was born on the South coast of England, and to this day, still lives by the sea. After years spent working in retail, where she met enough versatile characters to write hundreds of books, she finally took the plunge and quit her day job. Kyra's debut novel, Game On, was released in July 2012. While fiction writing has always been her passion, she also has numerous articles on a variety of topics published on prolific websites.

Thanks again Kyra for doing what you do best and thanks to everyone for taking the time to stop by and see what Kyra has up her sleeves this time!

If you are here for the And You Are? Bloghop that is here!
Posted by Dani at Monday, December 03, 2012