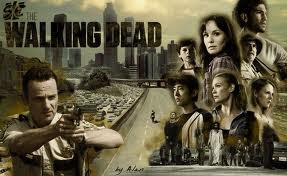 Repeating the title; I have a bone to pick with The Walking Dead! Not that they can bring people back from the dead. Well, er, I mean, well you know what I mean, the non-re-animated.

Being a huge fan of the comics and even though I adore the show too; I'm a little perturb by the way the television series is playing out. First – why can’t a show/movie follow the novel/comic verbatim? It was turned into a show/movie because the writing was so great to begin with. Right? So why change it. I was excited to watch the show because I LOVE the comic. 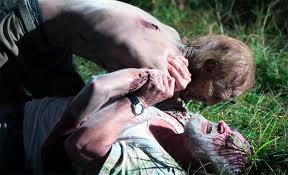 Continuing on to the bone that needs picking; In the comics Dale loses a leg after being bitten. Not ripped opened by a blood thirty zombie. Yes he eventually gets infected and dies at some point, but in the comics he had such a wonderful part (especially after he gets bitten). It might sound a little demented but I loved his part in the comics. He loses a leg after ebing bitten on the ankle, he survives, he gets bitten again, a gang of cannibalists (is that even a word) capture him, cut off and eat his other leg not knowing he has been infected. Dale, having his legs removed one way or another and now knowing he is going to become one of those which he distastes, finds it funny that this group of marauders is now going to become infected. 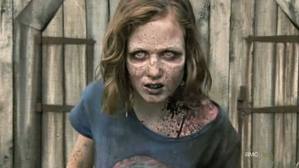 Sounds like a good scenario to play out on tv, right?! Apparently NOT! Dale, the level-headed, humanitarian, was unfortunately killed off in last nights episode to join Sophia, another individual that met her demise in the tv series, however, currently lives on in the comics.

I feel better now, even though I want to continue my tantrum towards other characters in the show, but I do not want to ruin it for the non-comic book readers.

Email ThisBlogThis!Share to TwitterShare to FacebookShare to Pinterest
Labels: The Walking Dead